These flashs come from true paintings worked on “elephant” paper. the mix between acquarelle and acrylic enable to obtain several levels of contrasts added to the background’s texture that i make following my will, this remind the atmopshere of ancient necromancians engravings wich is perfect to illustrate my work on skulls. This is the logical following of my fascination for Edgar Poe and Robert Howard’s universes: a mix of stories and esotericism. Symbolism is a fundamentale base of my graphical research in paintaing and in tattoo; it’s full influence is expressed through my drawings. The skull represents the physical shape: the anatomical stucture; the eye represents the spiritual shape. The red color comes back in those paintings as a leit motive: vital fluid, waves, flames, drippings.The red wich at the same time fascinates and repulses is a pigment that i love to use on canvas and on skins contrasting with ochre and golden colors, it underlines the alchemycal side of these works. To stimulate my creativity subjects must be discussed without compromise by cristalising one idea, one personality, one message, one vision!

This a guarentee of truth, a pact of blood. This genuine exchange between to people during a tattoo is precious and gives all the meaning to my vocation. I met NIKO by a nice saturday afternoon, tattoo artist for htirteen years and owner of a parisian tattoo shop: Kustom Tattoo, salon de tatouage à paris. This self taught tattoo artist and travel lover gives me his vision on actual body art.

1) You’ve traveled a lot. According to you what is the difference between what’s happenig in france concerning body modifications and the other counries ?

Quebec, concerning body art and tattoo culture has dozen of years of advance. It’s their culture in fact. Japan, the U.S, Oceania are the craddle of tattoo. And then ther’s a fashion effect which is imported. The french culture does not include tattoo which explains it’s backlog side. On the other side Italy has a developped tattoo culture whereas it’s not in it’s tradition (same for spain). There’s a kind of “non acceptance” toward tattoo without any logical argument to explain it. the french are living catch-22. There’s no rock’n’roll culture here which do no promote the devlopment of tattoo on the contrary of the nothern countries, Germany and…the U.S.A. France is more interested by the fashion effetc because it’s all it got.

2) Do you, currently, see a fashion effetc on the works you are asked to do or do they have a deep meaning to the persones concerned ?

The extension of tattoo has been done but, tattoo in general din’t progress though. Tribal tattoo is always in the shadow. people has really basic ideas. Then all depends on the work developped by the artist. But the explosin of tattoo happened in 2000 till now with all the body art street shops blooming at chatelet. We’ve suffered the bad side of the Americans with these shops own by non competent people. On the other side it enable tattoo artists to come out from the undeground. This evolution has a good and a bad side. It doesn’t give the time to educate people to what is tattoo: they take what they are given. However on our internent site there in absolutly no tribal; but people still come to us for tribal. Wich proves we’ve made an original site; but one don’t go a chinese restaurant asking for couscous. This is only because it makes work the people i work with, because all tattoo artist must be able to do tribal. It’s frustrating this capital (paris) which is not open minded has it seems. I especially came to paris to find these open mindedness in reality it’s more limited. I would say say that the rock’n’roll spirit of the 80’s is dead despite the punk movement whic stay “trendy” like the u.s rap movment. I have worked a lot on the U.S west coast it’s frustrating to be more famous abroad than here.

3) So you think that all comes from the “trendy” side ?

I think that we are just very slow in every domain. We have people who can make things evolve but ther’s a moment when you are stuck. it’s slow, it’s heavy. it’s hard to explain.we stay on our basics to the point we get surpassed. Fashion was inevitable in Paris but today i don’t think it is best here than anywhere else. Moreoverc the configuration in paris is special: in Barcelone all shops are in the all town whereas in paris there are concentrated in the center and then it’s the suburb. I have the feeling that we always have the same kind of customers. Each time we want an evolution: it’s a battle. We have to explain to peole how it work, we lose time.

The tattoo press is not realy develloped in france. those days the only well known and worthy magazine is italian: TATTOO ENERGY.

In france body art is a spectacular element for the media. They will make a show on M6 (commercial french channel) just to show a kid hanged at the ceiling in his flat. It’s a show to scare the rednecks. Medias are lowering the debate instead of advising people. The M6’s show created a great negative buzz around tattoo and body modifications, the public cried out but parents still come with their foreteen years old kid for a piercing. So we don’t give importance to that any more. They have to know that basically a tattooer is an artist, he is not a baker that must earn a precise amount of money per day. The good tattoo artist must do a deep work, he got a sensitivity, a passion wich form the base of his job. A tattoo artist maybe a cartoonist and many more things.

4) To you why tattoo and piercing have been so trendy these last years ?

I would say it’s since 19994/1995, before in france no one would know piercing. Why has it become trendy? because we had undergone the influence of other civilisations. We live on the same planet despite our heavy, slow way. Ther’s also the influence of the american stars except that to them body modifications are normal on the contrary of france. In the USA some tattoo artists got fan clubs!

Tattoo is an antidote to bullshit! everyone get tattooed but they are hidding it. So it’s an expression of personal freedom.It’s a revolution on one’s own body whic has always been there. It follows history. There’s never been a true “fashion” of tattoo. When Marco Polo came back from asia he braught back noodles but also tattoo. Tattoo made it’s way everywhere. After we had this negative image of tattoo link to the prisoners, but their were also sailors who had saw it on the Maoris etc…it’s come a long way! In Asia the buddhists priests got the right to do tatto for exemple. To me it’s a right to personal identification. But i don’t think you have to be pierced at forteen.

5) What is the reason people get tattooed ? A esthetical or other reasons ?

I think one needs more than easthetics to keep something on it’s skins a whole life. According to me it’s before everything an exchange between two persons. Yesterday for exemple I tattooed a man who wanted something precise, important to him. We talked a lot about it. It’s before all an exchange, it’s not juts a pay-sit-get tattooed-and leave attitude.

6) Some say that the act of tattooing and body modification in general, is made at important moment of life. According to your professional experience would you confirm this theory ?

There’s something permanent in the act of tattooing so there’s a will to mark a moment of life. Personnaly i never been tattooed at key moments but it depends on the perons. But if one marks each moment of it’s life with a tattoo , one must be carefull because we only got one body!

There’s also a love for tattoo in the beginnig wich gives you the will to have one. There’s the fact of loving tattoo and to want one without knowing the design and then there’s the meeting with the artist. The tattoo will be born from this meeting. I have an artistic approach of course but someone outside the tattoo scene and who wants to get tattooed must be understood. Because tattoo have a personal, social and intellectual impact. The first time a got tattooed i realised that i’ll never be the same again. It’s important to realise that something will change in your life. So if it’s to mark a change or an evolution the most important thing is that it must be positive. But of course their’s a lot of psychology in the act of tattooing. Finaly i would say that only aesthetical figures must give some work to lasers…errors happen.

7) Body modifications have been related for a long time with people that are supposedly bad minded. With the blooming of tattooing have you seen people who want to get tattooed to evacuate a kind of suffering ?

Yes i met some. Anyays you meet all kind of people when you are a tattooer. But they’re not the majority of my customers and they are not more numerous today than in the past. One can fell well and loving get tattooed. I don’t realy like Neurotics and psychopaths.

8) Do you agree with this theory: women or more into aesthetics whereas men want to give a precise image of themselves via their corporal ornaments ?

That’s funny because for the tahitians it worked this way: a woman had to be tattooed to be beautyfull, a man to show who he was. Currently we find this kind of persons but it’s not with them that we make the best works. Concerning women were wear by only two or three female singer and ultimatly the phenomenon spread. But the low part of the back is not the up part of the head, wich suggest certain things. It’s a way to take care of one self not to sublimate but to see one self in an other way. I call this a personal revolution, for a man as for a woman.

9) Do you think that piercing and tattooing are linked ?

They are both corporal modifications. One is more ephemeral than the other. but yes they join together. and pirecing is more asked because of the ears piercing.

10) Do you think that present body modification phenomenon will change, progress, or on the contrary stop ?

To disapear I don’t think so. Because it has become an artistical mean of expression whatever happens; as long as it doesn’t break the body to the point it crate injuries. I don’t see how it could calm down with the new media developping this times. Because of M6 some will go straight into the sensational. It’s a bit like the “jack ass” trip. They should do a show where they teach people about tattooing. W hen you are into the media you must show the two sides not only make a spectacular show. But this doesn’t prevent the youngsters to get pierced. It becomes “revolutionary”

like : ” the grownups hate it so i want one”. It’s unbelivebale that the medias don’t have this pedagogical will to inform because whatever they do they will never stop it. History is at work and body modifications are part of it. To say that everything is the same is to reduce the phenomenon it’s stupid and irresponsible. ready or not body modifications won’t stop. 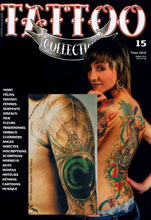 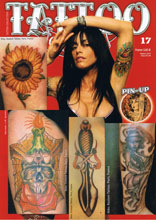 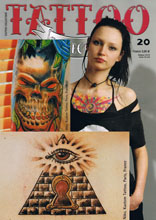 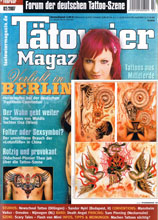 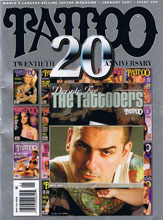 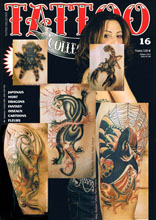 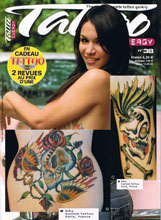 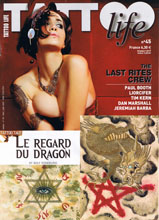 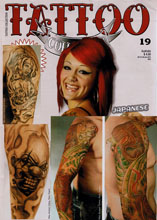 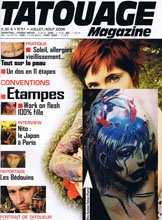